Now that we live in Mesa, J has been able to go back to school after his semester break. Since there is no pre-k programs in QC at the schools and preschool was getting too expensive I decided to take him out. So he went for 2 yrs. and then nothing. Needless to say he was pretty bored, but now he is in Pre-k at the local school with his cousin and our new next door neighbor. He absolutely loves it. The first week it was Easy to get him out of bed at 7 in the a.m. ( being that he usually sleeps till 9 or 10) but he was so excited about school that he jumped out of bed. Of course the excitement has worn off so getting him out of bed is a bear. But he still loves being there, he loves his teachers, P.E., recess, class and especially all his new friends. He thinks school is play time, so I don't know how his teachers are doing. He says that his teacher always calls him Cooper ( his older cousin) since they both have shaved heads. Luckily there is no one else Jackson would like to be compared to more. Coop is his Idol. I am so glad he loves school and his homework. I hope it lasts. 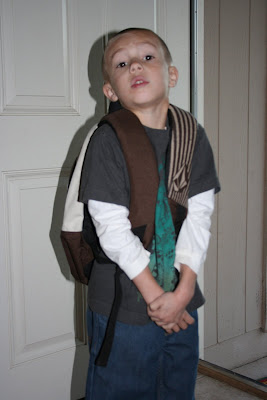 The other day J was at his cousins house and a friend of theirs came up to him and said "Hi Jackson" he replied with " you can call me J, J -dawg, Z, Zilla, thats what my friends call me."
We all got a huge chuckle out of that.